I would not have a stoma!

In August 2006, I got stomach pain and diarrhoea, and I felt very weak. My doctor treated me for a bowel infection. The week after, it got worse, and I had periods with pain where I laid crouching on the toilet floor. When I was admitted to hospital some weeks later, I had lost a lot of weight — gone from 80 kg to 55 kg. I was so weak that I could not do anything. The stoma care nurse came several times to talk to me and site the stoma, but every time, I sent her away — I was not going to have a stoma! I had been searching on the Internet, and what I saw and read about stomas gave me an impression of a life to which I could not adopt a positive attitude.

After a couple of days, the doctor came and said that it was a matter of life or death if I didn’t get an operation. Together with the stomal therapy nurse, we found the right place for my stoma; it was important to me that I still could wear my uniform as a policeman. When I woke up, I was feeling so bad. I was still in bed thinking: 'I am dying now', but the surgeon came and told me the operation had been successful.

My wife was fantastic

My wife, with whom I have been together for 5 years, was at hospital every day, and she has been a fantastic support. Initially I did not want to look at the stoma, but one day she insisted on being by my side when my stoma pouch was changed. I looked at her, and she did not show any kind of discomfort and that helped me so much.

After discharging from hospital, I was so weak and needed help even to take a shower. I was very determined in my rehabilitation and had set a goal for every week. The first week I started my training by walking one block, and the week after, it was two blocks and so on. I must admit that there were days when I could not pull myself together, but my wife was there, and she made sure that I got out of the house.

Sports is a part of my life

I have always been dedicated to sports, and I wanted to get back in shape. When I was in hospital I read about a fireman who had a stoma, and it did not have any effect on either his private life or his working life. I compared myself with him because I have a physically hard job as well, working as a policeman on a SWAT team, and I did not want to change anything about that. I enjoy my job and have been working like this for 6 years. It is a physically demanding job, and I needed to get back to my old shape.

I returned to work after 3 months, and a year after surgery, I participated in a competition between the SWAT team and the parachute troops. We had to run 10 miles with full equipment (15 kg), and I came in before five of my colleagues and was very satisfied with my performance. I made a mistake by not calculating that without the large bowel, I needed more fluid and salt, so when I reached the finish line I had cramps in my legs.

I got a long list of different foods I should be aware of from the hospital. There were so many limitations, I had a difficult time finding what to eat — much of the food on the list was what I normally ate. On a journey to Turkey 2 months after surgery, I had to eat a lot of the food that was on the list — vegetables and fruits — simply because the food at the holiday resort was uneatable. That changed everything, because I found out that I could eat it without any problems, and now I do not put any limitations on what I eat.

I do my exercises every day in a park nearby, together with our big dog. I run and do 10 press-ups at each bench on the route. One day a woman stood staring at me, and I asked her if she needed any help, but she just wanted to know how I could manage the way I was training. I told her that she could do the same, but no — she had a stoma. 'So do I', I said, and I had to show her — otherwise she would not believe me. We had a nice talk and I still meet her. Now she is doing power walking.

As I said before, it helped me a lot to read about the fireman who could easily manage his job after getting a stoma. I would have liked to talk to a person like that when I was at hospital, so now I frequently visit patients and talk with them about living life with a stoma.

Like the limitations I got on food, I was also told that I could not do my fitness like before, because heavy weights would not go well with my stoma. I have nicely and quietly increased the intensity of my training, and now I do my training just like before my operation.

I think it is very important that you do not give yourself limitations, but set goals and reach them without pushing yourself too hard. In November 2008, I got married to Sadie, and we now have a very healthy baby boy called Harley who was born in August 2009.

I have been offered to get my stoma reversed, but I have a very good life, and the stoma is no hindrance to my life and to our lifestyle. I know what I have now, and I have no problems whatsoever, so I do not think I will have the reverse operation. 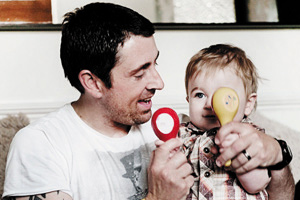 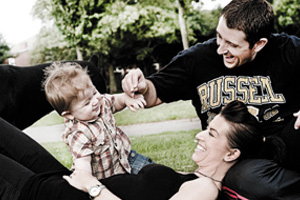 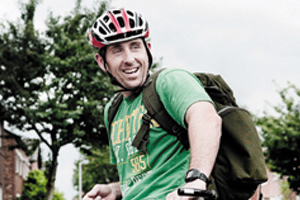