Colostomy since 2001
Country: The Netherlands
Occupation: Housewife for 11 years due to her disease; trained as a beautician
Leisure time: Does work for the local patient association; loves to shop

Nothing to laugh about, but we did!

At the age of 20, I was diagnosed with Crohn’s disease. I was affected with a lot of pain from fistulas and abscesses. I was very ill before surgery, and it became a matter of life or death. Because I was in such bad shape, I had two operations in 3 weeks and was in intensive care for several days. After that things got better, and I slowly started to accept the stoma, but that didn’t happen overnight. My husband has been a fantastic support. He was there for me the whole time. We have always made a lot of jokes, and we did the same about the stoma, which was a relief. The jokes and laughter helped me see the bright side of life, and at the same time, I felt so much better.

Because of the trauma, I was very scared and did not want anyone to touch my belly, so I took care of the stoma myself, and it went very well. In the beginning I used a one-piece pouch, but I could not control it, and I had too many leakages. A two-piece pouch is much better for me. I feel secure now and do not worry about leakage. I change the wafer every third day and the pouch every day. In fact, I feel so secure that when it comes to toilet visits now, I am the one waiting for my husband, not the other way around, just like it was before I got my stoma.

Be open about it

It took a long time for my belly to look normal after the operation; it was distended and it looked like I was pregnant. I felt that people stared at me and that they could see the stoma. Some people I hadn’t seen for a long time even asked me when I was going to give birth. 'I have just had stoma surgery', I said, and that was also a help for me, not trying to hide anything. I am very open by nature, and I really think it is a huge help if you are able to talk about having a stoma. It should not be taboo. Being open about it also helps other people that have to go through stoma surgery. I am working as a volunteer for the patient association, where I talk about how it is and how it affects my life. When I talk to someone that would rather be dead than have a stoma, I have a lot to do. I have talked to people who, after several conversations, still feel that way, and that makes me sad and a little bit angry!

Due to the two surgeries, I have developed a hernia, which doesn’t make my belly look good, but I am still very fond of my stoma because it allows me to live a much better life. Within the next couple of months, I am going to have a new operation due to the cancer risk in my rectum. I hope that it will be possible to do a hernia operation at the same time, because I have to live with the stoma for the rest of my life.

Even though I have a stoma, I still have Crohn’s disease, which means that I am unable to work in my former job as a vendor in a drugstore. There were days I was so tired that I couldn’t do anything except lie on the sofa with my laptop and work on the web page for the patient association. I am much better now; I have graduated as a beauty connoisseur, and I have started to train as a visagiste. Having a stoma means that you also have to take good care of your skin, and as we age, it becomes even more important to look after ourselves. I make an effort to keep my skin healthy and in good shape. 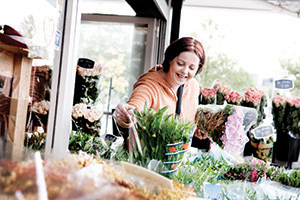 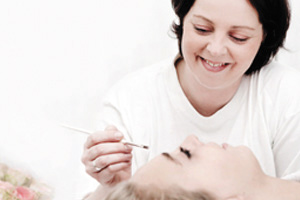