Empowering You to Own Your Journey

Victoria Danson had ostomy surgery as a result of Inflammatory Bowel Disease (IBD) and now inspires others with her positive outlook on life with a stoma. 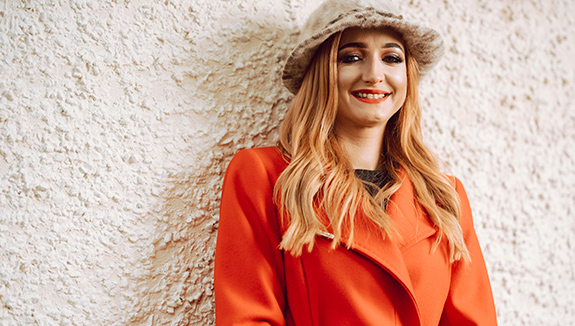 Read an interview with Victoria about her experiences before and after stoma surgery.

Before your operation, did you have any misconceptions about stoma surgery and what life with a stoma would be like?
I thought people would treat me differently and that worried me. And I had never actually seen a stoma bag before, so I thought they were going to be really big and ugly.

What happened before and after your stoma surgery?
My consultant was fantastic before my surgery. He actually drew me a picture of what he was going to do. He drew the bowel and what he was going to cut out. He even drew a stoma bag and where that was going to be placed. The stoma nurse showed me different bags and she gave me the option of where I wanted my stoma. I said, “Wherever you think would be best,” and she absolutely put it in the right spot because I wear high-rise jeans and bikinis.

My consultant also took my hand. It's so important to have that human touch when you're in a vulnerable and weak situation – for someone to comfort you, and to tell you that everything is going to be OK. You don't always remember exactly what people say, but you always remember how they made you feel. The last thing I said before I went to sleep was, “Please can you make sure you give me a neat scar?” But that ended up being the least of my worries when I woke up!

When I woke up in intensive care, my consultant took my hand again and said, “I don't know how you were managing because you had abdominal sepsis.” The reason why the abscess hadn't been visible on the scans was because my body had surrounded it with fat, to stop it from spreading. That's how clever and amazing your body is!

The aftercare was fantastic. The stoma nurses were so empathetic and sensitive. My life had changed dramatically within only a couple of days. I now had to get used to emptying and changing the stoma bag. I really struggled with having the heaviness of the bag. I felt like I was weighted down on the right-hand side. My stoma nurses were so supportive. They helped me learn how to manage my bag, and were always there for me when I was having other procedures done – like having my catheter removed.

I can’t imagine how daunting it could be to have this surgery if you've got time to think about it beforehand. I now speak to patients before their surgery, and answer any questions and address any fears that they have. They are always relieved to talk to somebody who can give them a bit of peace of mind. The stoma care nurses invite me along to stoma education days. I also have done guest speaking for the NHS, and they are a big part of my life. They are fantastic and do a great job.

Is there anything that made a difference to you in the early days, just after you'd had your surgery?
After I had the surgery and was back on the ward, the stoma nurses arranged for two girls to come and see me who'd had surgery and were living with a stoma. When I saw them I hadn't washed my hair for two weeks and had lost lots of weight. I felt awful. When they came to my bedside they had makeup on and they looked good. They were working and leading active lives, and had children. When they were telling me about their experiences of being in hospital that was a bit of lightbulb moment for me. I realised how important it is to talk to others who have had similar experiences.

It also showed me “a light at the end of the tunnel.” When you are in that hospital bed on your own and you can only see your family during visiting hours, you have a lot of time to think. I realized that I wanted to set up a support group to bring people together who were on the same journey – people who were living with IBD, or who had surgery and were living with a stoma, The idea came to me after I'd spoken to those two girls, and I still speak to them today.

What happened when you were discharged from the hospital?
When I left the hospital I was still really weak. I was only six stone and had lost almost all of my muscle mass. I couldn't even walk up the stairs! I moved in with my grandma and grandad to use their stair lift, which was really nice because it was in the family home that I grew up in. I remember staring out the window, the same window that I used to look out when I was a child when I had hopes and dreams. Now I had a new dream. I was going to set up a support group, bring people together, and raise awareness about having a stoma. Having a stoma is nothing to be afraid of and it's not a bad thing.

So, that gave me the purpose that I needed to recover – and to get back to work, so that I could fund the group. Infection in my scar tissue set me back a little. It took me about six months to get my core strength back. You don't realise how much of your core strength is in your stomach until you have an incision there!

What happened the first time you put on a swimming costume after your surgery?
I remember shopping around everywhere to try and find a swimming costume that would cover my stoma bag. I managed to find one that had an extra piece of frill round the front that was perfect because it covered the bag but still looked really pretty.

I took my son to a group swimming class when he was nine weeks old. It was quite daunting, having to walk around the pool past people in the viewing gallery. But I knew that if I didn't get in the water with my son he was going to miss out – and now he's a really good swimmer! It’s good to put yourself out of your comfort zone. That's how you grow.

What are your top tips for people who are new to living with a stoma?
Diet and lifestyle are major factors. I have found it beneficial to remove processed foods from my diet. I also don’t eat the skins on foods like potatoes and cucumbers, since they can be hard to digest. I like to drink herbal tea and green tea, and I eat antioxidant foods like berries on a daily basis.

To anybody who is thinking about having stoma surgery, I would say don’t be afraid, because it will change your life for the better. You will regain control of your life and get your freedom back. I’m not saying it is going to be absolutely amazing because of course there will be some difficult days. But the good days will absolutely outweigh them!

People who provided testimonials received compensation from Hollister Incorporated. The testimonials, statements, and opinions presented are applicable to the people depicted. These testimonials are representative of their experience, but the exact results and experience will be unique and individual to each person.